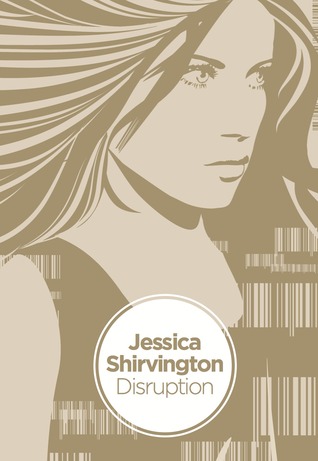 What if a microchip could identify your perfect match?
What if it could be used against you and the ones you love?


Eight years ago, Mercer Corporation’s M-Bands became mandatory. An evolution of the smartphone, the bracelets promised an easier life. Instead, they have come to control it.

Two years ago, Maggie Stevens watched helplessly as one of the people she loves most was taken from her, shattering her world as she knew it.


Now, Maggie is ready. And Quentin Mercer – heir to the M-Corp empire – has become key to Maggie’s plan. But as the pieces of her dangerous design fall into place, could Quentin’s involvement destroy everything she’s fought for?


In a world full of broken promises, the ones Maggie must keep could be the most heartbreaking.

What can I say? This book wowed me with its originality, great characters and a story that left me on the edge of my seat. Even though I’m a relative newbie to Jessica Shirvington’s books, I have to say that after reading Disruption I am definitely eager to read her acclaimed ‘Embrace’ series (aka. The Violet Eden Chapters) and ‘Between the Lives’ which my best friend read and loved. I have these sitting patiently on my bookshelf and can’t wait to start them now! Anyway – back to this review…

In this future, M-bands are compulsory for every citizen to wear, offering to make every aspect of life easier – from making a payment to finding how you rate with someone to form a good relationship. Maggie Stevens lost her father because of what he was and would do anything to get him back, even if it means having to get Quentin Mercer – the son of the leader of the Mercer Corporation involved in her plan. Along with the help of hacking master Gus, Maggie sets of to fulfill a dangerous plan which could go terribly wrong.

What I think gave me an even better insight going into this book was going to the book launch for this novel and seeing Jessica Shirvington in person talking about the book and how she came up with the concepts. Although I was already about 100 pages in before I went to this, afterwards I appreciated the book even more and couldn’t wait to see what would happen next. Maggie was a strong and witty female lead who knew how to protect herself in this futuristic world. As Jessica pointed out – this is not a dystopian society but a version our world in the future with new technology. I was so glad to find a story that was not only original and really intriguing in its concept, but highly entertaining as well. Following Maggie’s journey throughout the book throughout the danger she puts herself in and the discoveries she makes about the Mercer Corporation and herself along the way made this a heck of a ride to read. It was everything you could want really: A kick ass female lead, thrilling plot and and ending that leaves you begging for more.

Apart from Maggie’s witty personality and bravery demonstrated throughout the book in the daring risks she takes, the world-building in this book was also executed really well. All the descriptions of new technology and state of society in the time were inserted seamlessly into the story without distracting from the flow of the action. All the talk about ‘negs’ and the evolution of ‘Phera tech’, using the chemistry of pheromones used to determine who desirable matches would be was also an interesting inclusion which added more interest and originality for me as a reader. It is obvious that there had been research done before writing this book, and that has come through in a positive way to make this a story that not only has some great action and hints at a romance, but one which you could imagine coming to some truth in the world one day. There was definitely never a dull moment, and some of the twists actually made me gasp in surprise, with the cliffhanger leaving me wanting so much more – I think the anticipation might be killing me already!

In conclusion, Jessica Shirvington has written a fantastic YA futuristic novel which really stands out from the crowd. The beautiful shiny cover and appropriate title are only a glimpse at the amazing quality of the writing inside with a story that will keep you hooked from the very first page. You guys don’t want to miss reading this!

Review: The Year of the Rat

Review: Waiting on the Sidelines

A Girl from Kansas